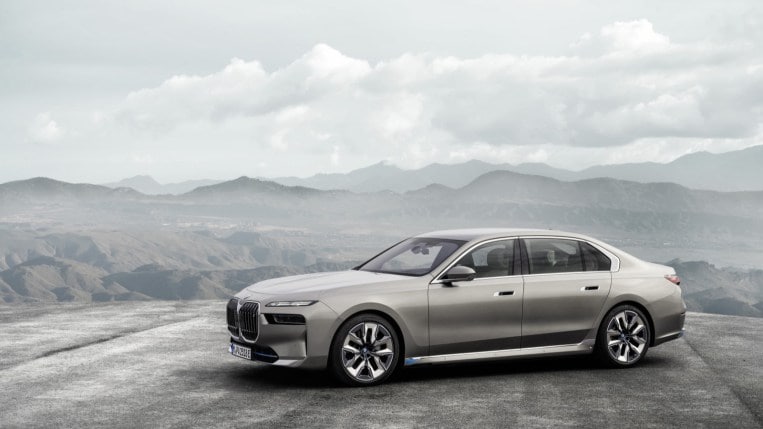 The rules are different for six-figure cars.

Below that figure, you have to choose what you want in a car. Some options have tremendous performance, with 0-60 mph times under 5 seconds and crisp handling. Others have immense living space or technology that will make your jaw drop open.

But you have to pick. You can’t have it all.

Most luxury automakers build a super-luxury sedan – a flagship 4-door that shows off everything their engineers and designers can do. These cars are pricey and sell in very low volume. BMW’s is the 7 Series. The company released an all-new one today.

Super-luxury cars are rarely beautiful in the conventional sense that sports cars can be. Instead, they have presence. They demand to be noticed not the way a beauty queen does but the way the CEO of a Fortune 500 company does.

The 2023 7 Series does it with mass and tailoring. It’s long and low, with a complicated front fascia full of folds and splits. Thin LED daytime running lights are split from the lower headlights completely. You can choose to have the LEDs made from Swarovski crystal because nothing suggests power quite like spending money for enhancements that are pretty much undetectable to everyone. 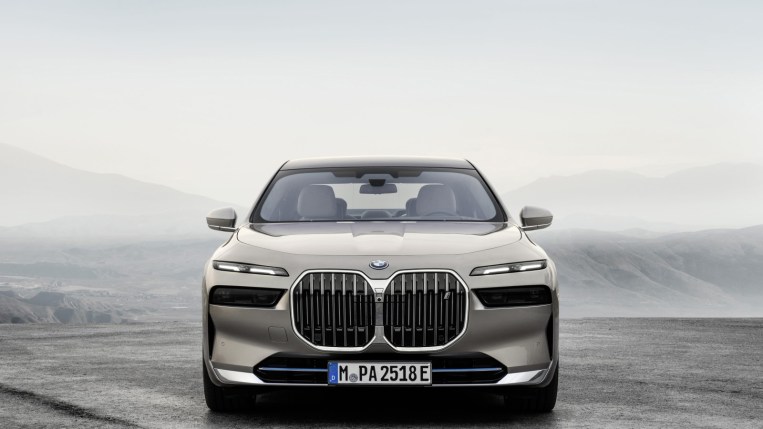 BMW’s recent designs have featured an enormous interpretation of the brand’s signature twin-kidney grille. It’s been divisive, with many reviewers and long-time fans… well… not fans. With the attitude typical of this type of car, BMW has made it even larger and lit it so that it can’t be politely ignored.

Once you’re past the audacity of the front, the lines are understated and elegant. Thick brightwork around the windows suggests an earlier era of design but doesn’t look outdated. It’s more tribute than copy.

Doors open themselves at the soft touch of a fingertip, revealing an elegant cabin. A dashboard in the traditional leather-and-exotic-wood of luxury cars is fronted by a huge curved bezel housing two screens, one for the driver’s instruments and another to control navigation and entertainment functions. It’s a sophisticated look, but we can’t help but notice that the sub-$30,000 Kia Sportage does the same trick almost as well.

No other car has the unique control system BMW calls “interaction bars.” A wide-faceted crystal line runs through the dashboard and looks like a decorative element. It’s not. It’s touch-sensitive. It controls the climate, heated seats, and other interior niceties. It can be backlit in different colors to suit your mood.

Also optional is the “executive lounge” rear seating package. It gives the rear seats nearly as much adjustability as the driver’s seat, including a 42-degree recline. The seats are controlled through little phone-sized screens embedded in the doors. We thought we’d seen everywhere automakers could pack a screen, but BMW found unused space for another one. 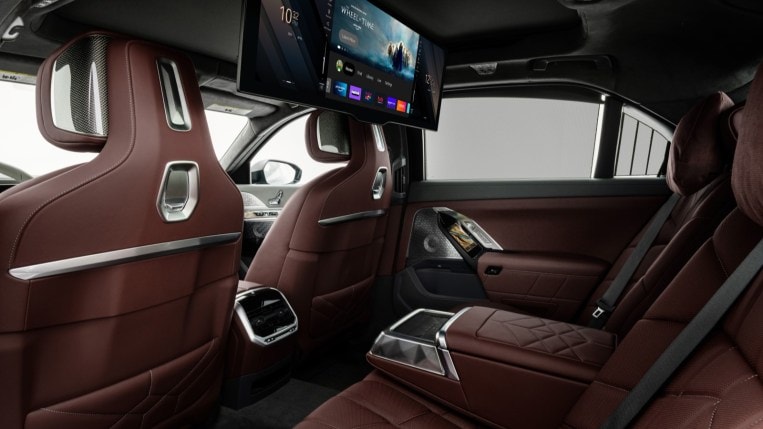 Speaking of screens, the show-stopper is a 31.3-inch 8K touchscreen display that drops down from the roof to entertain rear-seat passengers. Combined with the 36-speaker Bowers & Wilkins surround-sound system, it should make the new 7 Series one of the best places to catch a movie.

The base 740i uses a 3.0-liter turbocharged inline 6-cylinder engine making 375 horsepower. It sends power to the rear wheels and gets the enormous car from 0 to 60 mph in 5 seconds flat. Yes, you can out-drag a tiny Toyota GR 86 in it without rear-seat passengers spilling a drop of their tea.

A step up to the 760i gets BMW’s venerable 4.4-liter twin-turbo V8, making 544 horsepower. It comes mated to BMW’s xDrive all-wheel-drive system and does that same sprint in 4.2 seconds. It’s an elephant keeping up with the cheetahs for laughs.

Both engines use a mild-hybrid system and an 8-speed automatic transmission. 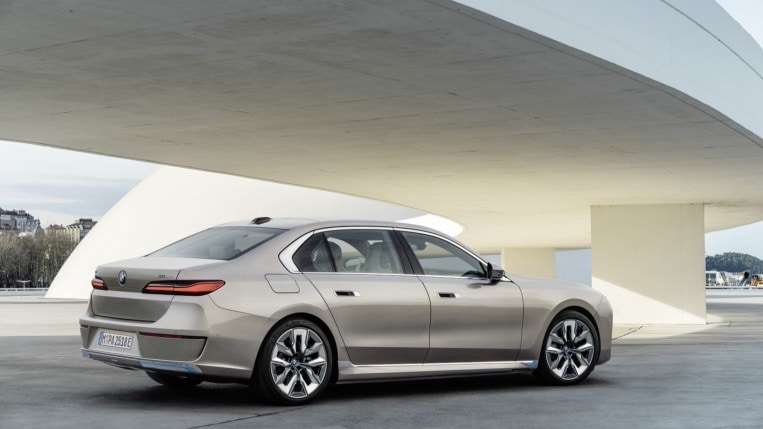 BMW predicts that it will have an EPA-certified range of around 300 miles. The EPA has not yet weighed in on that.

Every version uses an adjustable air suspension and adaptive dampers. Four-wheel-steering is standard, though we should note that its rear wheels turn only 3.5 degrees. That’s a far cry from the 10 degrees of the rival Mercedes-Benz S-Class and could make parking the big 7 a bit more challenging.

A full suite of driver aids is standard, and an optional Highway Assistant allows for hands-free cruising at up to 80 mph.

BMW dealers have already begun accepting reservations for the new 7 Series. It costs $1,500 to get in line.