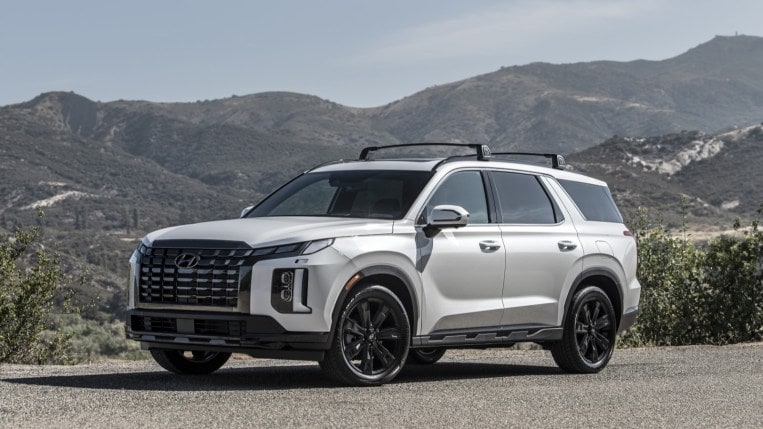 The 2022 Hyundai Palisade currently sits at number six in our list of the Best 3-Row SUVs. But it’s almost a twin of the vehicle that sits in first, the Kia Telluride. They share the same chassis, same engine, same transmission — they even have nearly identical dimensions.

The differences between the two are mostly matters of styling. With its boxier, more rugged looks and clean interior design, the Telluride wins the battle of intangibles.

For 2023, Hyundai’s going to make a lot of purchasing decisions harder. The Palisade is getting a Telluride-like makeover.

But the vibe of the SUV has changed. The old shield grille is gone, replaced with a wider, boxier version. The daytime running lights are integrated more seamlessly into the grille. The headlights below them take on a square shape as well.

Will it be enough to close the gap with its Kia cousin? Only time and sales figures will tell.

The 2023 Palisade is still offered in SE, SEL, Limited, and Calligraphy trims. But Hyundai adds an off-road styled XRT trim to the lineup for the new model year.

The XRT rides on 20-inch wheels and adds a sunroof and leatherette upholstery. But the real changes come for those who spring for AWD. Those models also come with hill descent control and two new driving modes — Snow and Tow.