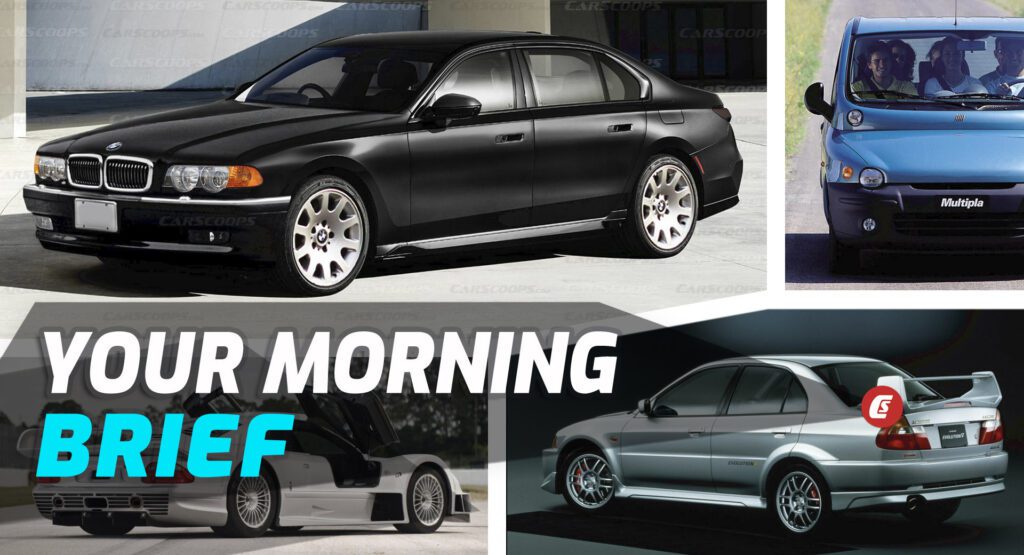 Good morning and welcome to our daily digest of automotive news from around the globe, starting with…

If you aren’t already too excited about the new year you should take a look at the classic cars that can be legally imported to the U.S. under the 25-year rule. We compiled a list of some of the most interesting examples, including the tiny first-gen smart ForTwo, the sporty Honda Accord Type R, both the Mitsubishi Lancer Evo V and Subaru Impreza 22B, the glorious sounding Alfa Romeo 166 3.0 V6, and the quirky Fiat Multipla six-seater minivan which is often described as the ugliest but also surprisingly practical car of its time. Finally, our billionaire readers will appreciate the fact they can now import and daily drive a Mercedes CLK-GTR Strassenversion in the US – if they can find one of course.

New BMW 7-Series Tries On The Faces Of Its Predecessors

The 2023 BMW 7-Series created a lot of controversy with its front-end design, prompting us to include it in one of our face-swapping sessions. We chose the original E23 from the ’70s, the admittedly gorgeous E38 from the ’90s, and the polarising E65 from the ’00s as donor cars, merging their faces with the G70’s bodywork. If you were the CEO of the Bavarian automaker, which one would you send as a brief to the designers for the next update of the 7-Series?

› The Legendary Ford Camarostang Has Been Crashed

What Else Is Making The News

#BREAKING: At least four people have died after two helicopters collided near Sea World on the Gold Coast this afternoon.

A very rare occasion of mid-air helicopter collision occurred in Gold Coast, Australia yesterday. As reported by BBC, four passengers in one of the helicopters died and three others are hospitalized in critical condition. The pilot of the other aircraft managed to make an emergency landing, with five out of the six passengers walking away with minor injuries. According to the Queensland Police, the accident happened while one helicopter was taking off and the other was landing.

Last year was not great for tech workers, as the industry faced unprecedented layoffs highlighted by Twitter under Elon Musk’s control. Thankfully the vast majority of the laid-off workers found a new job in the tech industry within a short period of time according to a new survey by ZipRecruiter shared with The Wall Street Journal. More specifically, 74% of them stayed in tech, 6% moved to retail or e-commerce, 5% to financial services, and 2% to healthcare. As reported by Gizmodo, 79% of the recently hired tech workers found their new job within three months of searching.