A day is coming soon when you and three of your closest friends can pile comfortably into your Ferrari. OK, maybe not you. We don’t know your tax bracket. But someone, somewhere, is going to take their Ferrari off-road. And it’s not going to be a horrific idea that causes six figures worth of damage.

The storied engineers from Maranello have turned their attention to SUVs.

Ferrari this week teased its upcoming sport utility vehicle with a short animation of exactly the thing you’d expect Ferrari to announce – a V12 engine. A 15-second video posted to Twitter showed the inner workings of a 12-cylinder mill, capped off by Ferrari’s signature red engine cover and a sound suspiciously close to that of the F140 engine found in the GT4C Lusso. 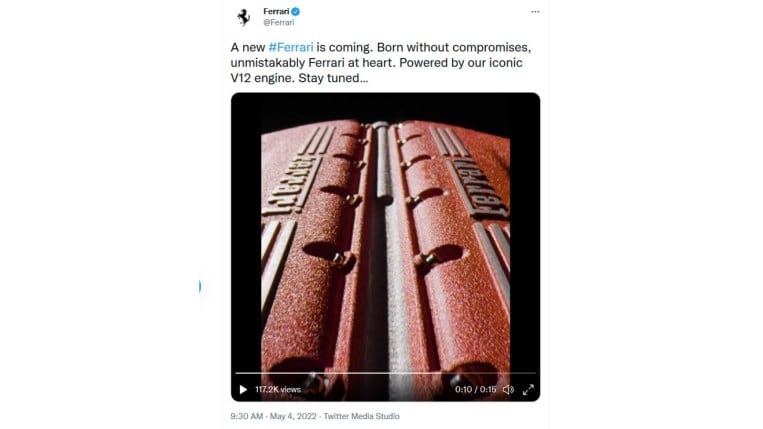 The GT4C already mates that engine to the kind of all-wheel-drive system a Ferrari SUV would need to be competitive.

An earlier teaser showed a head-on shot of the 4-door, looking satisfied with itself. Ferrari has named it Purosangue – Italian for “thoroughbred.”

That’s about all anyone outside Maranello knows for now.

So we’ll just leave this here: At the moment, the world’s most powerful production SUV is the Aston Martin DBX707, with its 697-horsepower 4.0-liter twin-turbo V8.

That sport-utility is tied for the title of quickest gasoline-powered SUV – the Porsche Cayenne Turbo GT can match its 3.1-second 0-60 mph sprint, and both are a half-a-heartbeat quicker than the Lamborghini Urus.

Of course, the all-electric Tesla Model X can rip to 60 mph in as little as 2.5 seconds.