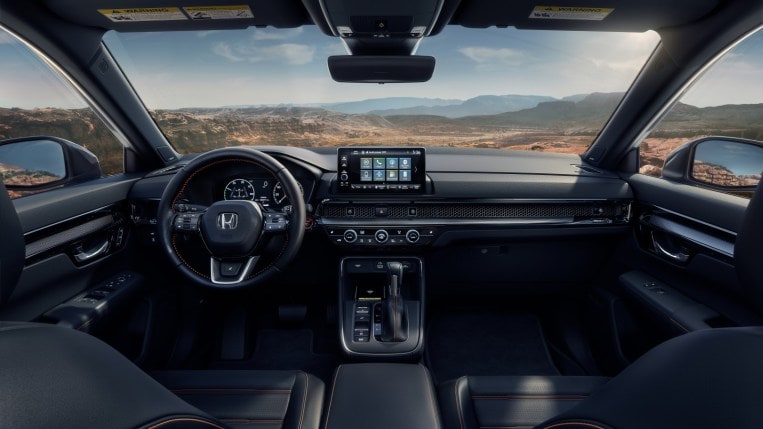 Honda traditionally turns its compact car platform into both the Civic compact sedan and the CR-V compact SUV. It redesigned the Civic from the wheels up for 2022, so we’ve been expecting an all-new CR-V for the 2023 model year.

Today, we got our first glimpse of it. Honda sent journalists a single photo of the compact SUV’s interior. It looks… well… it looks almost exactly like the new Civic’s cabin. That’s a good thing.

After all, the Civic is our Best Buy among compact cars for 2022. A taller Civic seems like a great idea, and most years, it is.

What draws the eye is the wide band of honeycomb metal down the width of the black leather dashboard. It looks like it’s all air vent, but if the Civic is any guide (we’re sure it is), then the air doesn’t flow out of the entire thing — but the vents are hidden within it.

Unlike in the Civic, the doors appear to have a similar line of metal trim that continues the effect around the cabin.

A touchscreen rises above the dash as though it should lower into a slot when not in use. It probably doesn’t. It looks like the same 9-inch model found on higher-trim Civics. Sensibly, it has a volume knob, so you can turn up the interesting part of the podcast without taking your eyes off the road.

Three knobs beneath look like they control the climate. Anyone who has fiddled with climate menus through an infotainment screen knows those knobs are a safety feature, too.

Lines Blurring in the Honda Showroom

Honda promises a full reveal of the 2023 CR-V on July 12, so we won’t have to wait long for more details. We’re mostly curious to see how Honda differentiates it from its little brother. The subcompact Honda HR-V used to be built on a different platform, but an all-new 2023 HR-V also rides on Civic bones. The CR-V is almost certainly bigger, though it will need to have a few more tricks in its bag to keep buyers from wandering over to a presumably-cheaper HR-V that offers much of the same ride quality. We’ll tell you what those tricks are when Honda shows more.