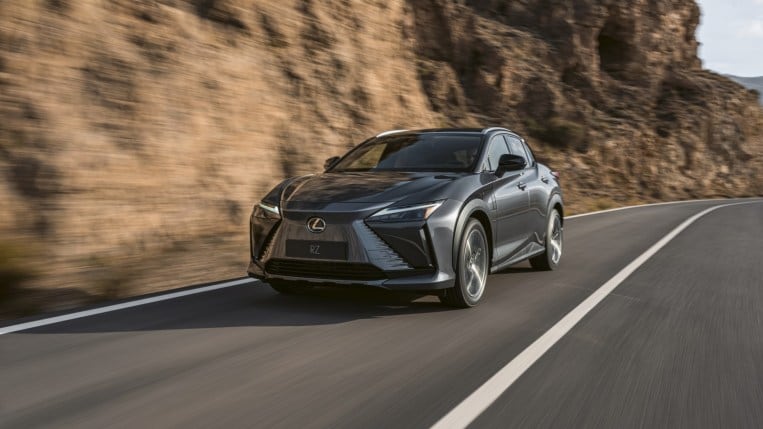 The first electric Lexus* is here, with 225 miles of range and 308 horsepower. The 2023 Lexus RZ 450e is a compact SUV with sleek looks and a brand new all-wheel-drive system.

Lexus hasn’t announced pricing details yet. We expect that information closer to the end of the year when the RZ is likely to reach sales lots.

Shares its Bones With a Toyota and a Subaru

The RZ shares its architecture with a Toyota and a Subaru. Toyota’s first mainstream electric vehicle, the 2023 bZ4X, will likely reach dealerships soon. Subaru’s first EV, the 2023 Solterra, shares almost all of its parts with that car. Lexus will probably not emphasize this in marketing the car, but the RZ rides on the same platform. Many new EVs are built on skateboard-like architectures that pack motors, batteries, and suspension all beneath the floor of a car. Engineers can scale these platforms up or down to design many different vehicles.

As the automotive world moves toward mostly electric lineups, it will become common for luxury cars and more affordable cars to share most of their parts.

Sleek Look With Lots of Character

The Lexus looks more refined than the Toyota, as you might expect. The brand’s controversial huge spindle grille gets a reverse interpretation here, with a sheet metal spindle shaped by air vents to its sides. The look is more understated than even Lexus’s gas-powered offerings. Sharp character lines in the doors make it look smaller than it is. A sharply raked liftgate may trade cargo space for style.

Inside, it’s all Lexus. The cabin cribs a lot from the similarly sized Lexus NX, including a generous 14-inch central touchscreen canted slightly toward the driver. 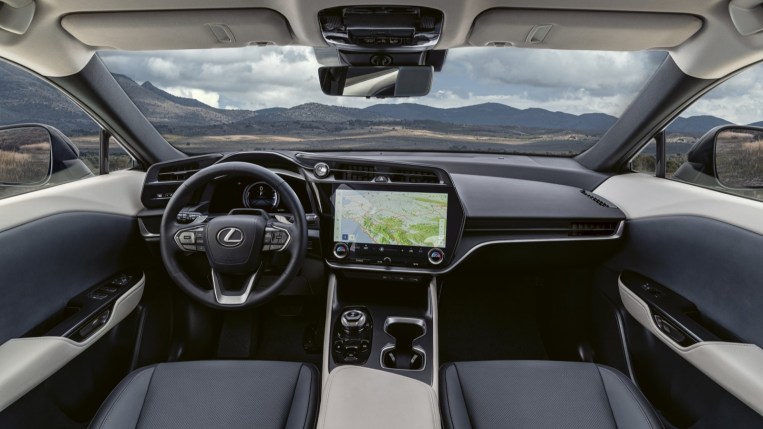 Lexus is famous for the quiet of its interiors. EVs present unique challenges to designers because they produce so little sound that wind and road noise seem amplified. Lexus says it has designed a new type of seal for the edges of the acoustic glass to keep those noises out. In case they still bother you, the RZ has the option of “expressive in-cabin sounds to convey the exhilaration of driving” played through the speakers to give drivers some acoustic feedback.

The RZ may share its platform with the Subaru and Toyota electric cars, but Lexus has given it new performance to set it apart.

The RZ uses two electric motors rather than the one of the bZ4X and Solterra. One, on the front axle, makes 201 horsepower. A second, on the rear axle, makes 107. They combine to give the RZ a respectable-for-a-luxury-car 308 horsepower.

Lexus says the two work together to create a new all-wheel-drive experience it calls DIRECT4. It constantly analyzes feedback from sensors at each wheel, including speed and steering angle, to vary the power at each thousands of times per minute. The system constantly adjusts power at each wheel to make the most of range, handling, and acceleration. At launch, the RZ will use normal mechanical steering linkages and a typical steering wheel. Later in its production run, Lexus will make a unique steer-by-wire system optional. It uses a steering yoke, much like what pilots of small aircraft use, in place of the traditional steering wheel.

Tesla has offered a similar steering yoke in its Model S sedan and Model X SUV this year to mixed reception from critics. Toyota, however, says that its system can vary the steering ratio so that drivers never have to execute a hand-over-hand turn, which may address many of the complaints about yokes that you may have heard from Tesla critics.

The RZ 450e uses a 71.4-kilowatt-hour battery pack. Lexus says it should earn an EPA range rating of about 225 miles, but the EPA has not yet tested the RZ.

*Lexus sells an electric version of its entry-level UX SUV in Europe and China. So we can treat this as the brand’s first EV for an American audience, but the second globally.