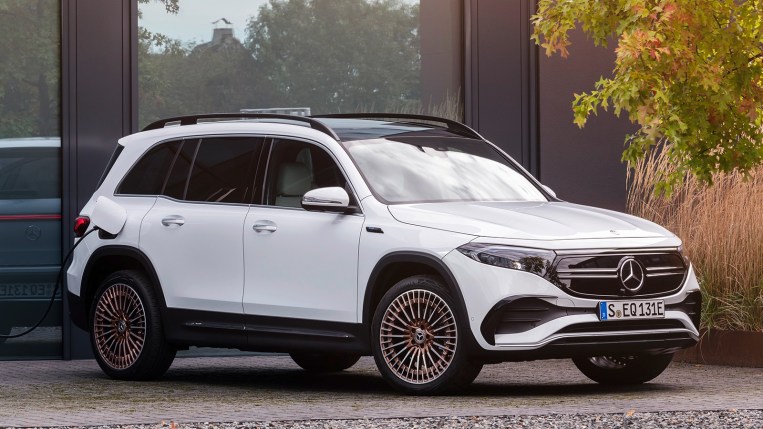 Interested in a luxurious all-electric SUV with up to three rows of seating? The conventional answer to your quest is the 2022 Tesla Model Y. As America’s best-selling electric vehicle, the Model Y offers excellent cargo space, range up to 330 miles, and standard all-wheel-drive (AWD). Asking price? $64,990, plus a $1,200 delivery fee.

Or, you could get a 2022 Mercedes-Benz EQB, which is essentially an electric version of Mercedes’ 2022 GLB small SUV. The EQB offers excellent room for up to seven in a small footprint, all-wheel drive (AWD) that adjusts grip between the axles for better traction, and the shocker — a starting price over $10,000 lower than the Telsa. Although you’ll have to settle for less driving range, the EQB manages about 260 miles between charges.

The EQB, Mercedes announced, will carry a starting price of $54,500 plus a $1,050 destination fee. On top of that, Mercedes electric vehicles (EVs) are also eligible for a $7,500 federal EV tax incentive that Tesla products are not. That cuts the effective price you’d pay for the Mercedes to nearly $18,000 less than the Model Y.

The numbers underline how the EV market is changing– and how it isn’t.

Tesla got a head start on legacy automakers, becoming the first company to market electric vehicles on a nationwide scale. That head start let it dominate mindshare: When Americans think of EVs, they think of Teslas.

But nearly every automaker has at least one EV on sale today, and some have many. Mercedes has pledged to sell nothing but electric cars (in markets that build enough infrastructure to support them) by the end of the decade. The EQB is just one of many it plans to bring to U.S. dealerships. Many Mercedes dealers have already had EQS and EQE sedans on the lot (of which many didn’t stay there long, as EVs are selling out quickly nationwide).

Many of those competitors qualify for the big federal discount. It applies only to the first 200,000 electric cars an automaker sells, so both Tesla and GM have exhausted the rebate. No one else has (though Toyota could at any minute).