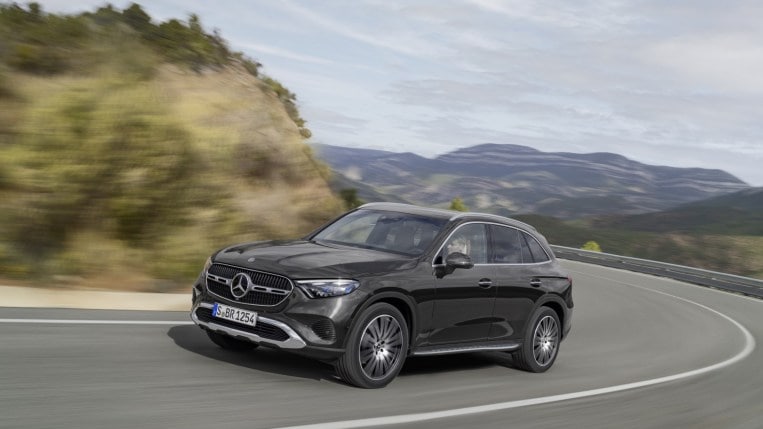 Luxury compact SUVs may be the vehicles most Americans aspire to right now. SUVs outsell cars and trucks combined these days. And last quarter, Americans bought luxury cars at near-record numbers. Compact luxury SUVs give drivers the tall, see-over-traffic stance they want, the luxury features they dream of, and a price many can manage.

With that in mind, Mercedes has revamped one of the best of them. The 2023 Mercedes-Benz GLC offers a handsome exterior, a stunning interior, and a burst of power when you need it.

A Sharp Evolution of a Good-Looking Exterior

The 2023 GLC looks like a natural evolution of the 2022 model, which was already one of the more handsome compact luxury sport utilities. The oversize three-pointed star common to current Mercedes grilles looks natural here. A subtle bulge in the hood seems like muscle. Contour lines at the rear haunches are tasteful and not overdrawn.

In a year when many automotive designers are toning down chrome with darker shades, the GLC’s brightwork stands out as stylish. 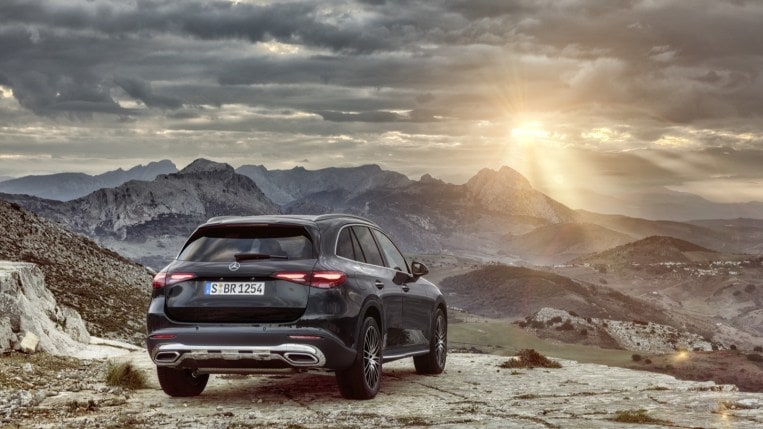 Mercedes has announced a plan to go all-electric by 2030 in markets that build enough infrastructure to support that decision. The company has started its switch to electricity by building an electric equivalent of many of its gasoline-powered models. The electric GLC counterpart isn’t here yet, but the gas-powered model is getting more efficient.

Under the hood is a 4-cylinder engine combined with a 48-volt mild-hybrid system. It’s good for 258 horsepower. Like in the C-Class sedan (with which it shares a chassis), the GLC can add a temporary boost to that power thanks to a technology borrowed from Mercedes’ Formula 1 racing team. An integrated starter generator provides bursts of up to 23 more horsepower for a few seconds.

Power goes through a 9-speed automatic transmission to the rear wheels in the standard GLC 300 or to all four in the all-wheel-drive GLC 300 4MATIC. The multi-link rear suspension is the same (well-received) setup as the old GLC. The front suspension is an all-new four-link design.

Mercedes will offer just one powertrain at launch. But we expect to see a plug-in hybrid (PHEV) version and a sport-tuned AMG model before long. 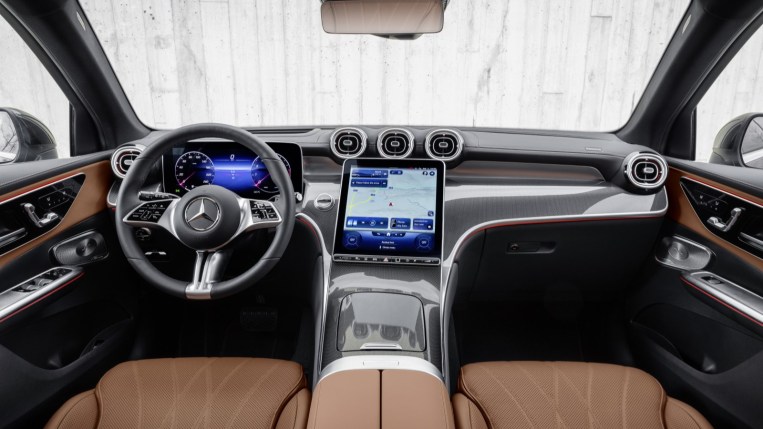 Opulent Interior for the Class

Mercedes’ interior design team is on a roll. The 2023 GLC is lovely inside, with a sleek, modern balance of smooth surfaces and soft leather. A new, freestanding 12.3-inch driver’s instrument panel and portrait-oriented 11.9-inch central touchscreen multimedia display stand out from the dashboard. The infotainment system runs Mercedes’ new MBUX user interface, which can accept voice commands (say “Hey, Mercedes” to start it).

Standard features include heated front seats and wireless Apple CarPlay/Android Auto. A fingerprint sensor can set the seating position, climate controls, and other adjustables to each driver’s preferred settings.

Though few would think of the GLC as an agile off-roader, Mercedes has given it a unique piece of trail kit we like. Called “transparent hood,” it uses cameras to give the driver a view of what’s under the front wheels – useful for navigating trails and tricky parking spots.

A new version of Mercedes’ Distronic driver assistance technologies can brake to avoid stationary vehicles from speeds up to 60 mph. The old model did the same to 30 mph. Active steering assistance now uses cameras 360 degrees around the vehicle to determine the safest path.

The 2023 GLC is one of the first vehicles to take full advantage of new federal laws allowing more advanced headlight systems. An optional Digital Light system shapes its beam to give drivers all the illumination of high beams without blinding oncoming traffic and highlights pedestrians with a spotlight function.