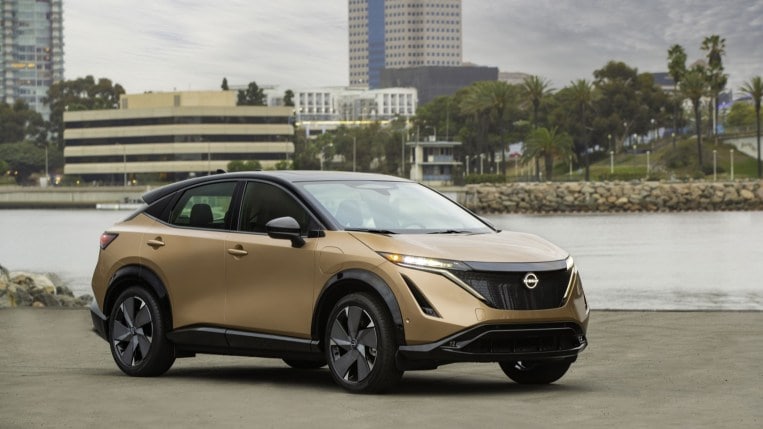 The Ariya is Nissan’s second EV, coming after the OG Nissan Leaf. The Leaf is still on sale, though rumors say a similarly-sized SUV will replace it within the next few years.

The Ariya is a compact crossover with an estimated range of 300 miles. The EPA hasn’t released official range figures yet. It has a price tag that starts at $45,950 before federal EV tax rebates, and a striking two-tone look. Designers gave it a big arched greenhouse over a body of angles and a tall false grille that makes it seem bigger than it is.

The Ariya is (or was) available in front- or all-wheel-drive (AWD). AWD models get two electric motors for a total of 389 horsepower. That’s a remarkable number for a small SUV from an affordable car maker.

Nissan hasn’t said how many Ariyas it set aside for the U.S. But an anonymous dealer told Automotive News that Nissan allocated about 6,000 for American dealerships to sell.

Everyone’s Selling Out of EVs

It’s not just Nissan. Dealerships keep selling out of EVs quickly. So far in 2022, Ford has sold out of its Mustang Mach-E SUVs before deliveries finished and its F-150 Lightning electric pickup before they even started. The CEO of the Volkswagen Group says that his VW, Audi, and Porsche brands are all essentially sold out of EVs for the year.

EV giant Tesla is currently taking reservations with backlogs. The order page for its best-selling Model Y currently tells customers they could be waiting 10 months for the car they buy today.

Nissan didn’t want to end up in that situation. Bill Wallace, CEO of Wallace Auto Group, which operates Nissan dealerships in Florida, told Automotive News, “taking orders that never get filled only makes for unhappy customers. We support not overpromising.”