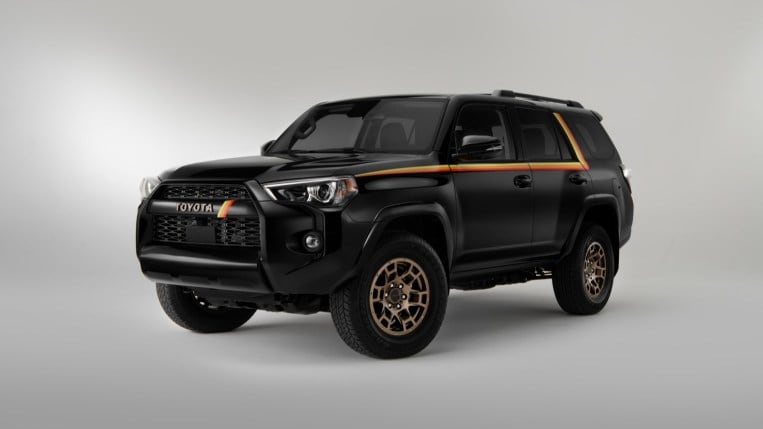 In 1983, Ronald Reagan was in the White House, John Denver handed the Best Album Grammy to Toto (people unironically loved Africa that year), and Toyota put some seats in the bed of a pickup truck. They put a removable fiberglass cap over it and called it an SUV, and thus the Toyota 4Runner was born.

It’s now comfortably middle-aged. Even has a kid (the Lexus GX was born in 2003 and is off in college these days). The 4Runner is turning 40.

A Cosmetic Package… But A Good One

To celebrate, it’s getting a throwback special edition. There isn’t much to the 2023 4Runner 40th Anniversary Edition. It’s just an appearance package. But maybe being old enough to remember the 1980s (Kelley Blue Book is a sprightly 96) makes us more prone to love prism decals.

Toyota hasn’t announced pricing for the 40th Anniversary 4Runner. It’s based on the SR5 Premium trim, which runs $41,515 in 2022. We expect it to cost a few thousand dollars over that, mostly due to the added cost of the wheels and adjustment for a year of wild inflation.

Toyota will build just 4,040 of them. Someone at Toyota likes that number game — last week, they announced plans to build 2,525 25th-Anniversary Edition Siennas).

The paint color matters little. Because everyone’s focus will be drawn to the glorious, Dark Side of the Moon style laser prism decal in a gold, orange, and red scheme right off a TDK cassette tape case. The three colors adorned Toyota racing trucks when The A-Team was on NBC. They look particularly stunning against the black, but the white is more nostalgically accurate to the colors of those original desert racers.

It rides on bronze-colored 17-inch alloy wheels. The real hero of the retro look, though, is the grille – its bronze-colored T O Y O T A script in the original blocky font makes the current 4Runner look classic in a way today’s circular logo never could.

A Logo From a Six Million Dollar Man Episode

Toyota has created a 40th Anniversary Edition logo with perfect retro styling that could fit naturally on the cover of any VHS tape. It’s embossed into the seats and fastened to the dash and doors. The seats and shift knob get black leather with bronze stitching. That’s a styling touch we don’t remember anyone thinking of in the 80s, but one that someone should have.

Buried in the press release, Toyota notes that all 2023 4Runners will get blind-spot monitoring and rear cross-traffic alert as standard equipment. That seems to be the only change for the aging 4Runner. The current model was designed for the 2010 model year and is getting old by automotive standards.

Though, we should admit, by 40, most of us have some 13-year-old things that are running just fine.